The World’s 10 Best Hypercars of All Time

In the automotive world, the term “hypercar” is not used loosely. It takes a special type of car to be considered a hypercar. In fact, a little more than a decade ago, not many people knew what exactly allowed a vehicle to be classified as a hypercar.

To brush up on your terminology, you should note that a hypercar refers to a specialized group of vehicles that supersede even the highest performing sports cars. Hypercars are usually exotic-looking, high-performance luxury sports cars with costly price tags.

Many have begun to fear that the age of hypercars is nearing its end, with the increasing concerns surrounding emissions and the ever-present “speed kills” mantra more pervasive than ever. As governments place more regulations and restrictions on the automotive industry, many believe hypercar manufacturers to be living on borrowed time.

Fortunately, this isn’t the case, as many hypercar manufacturers use modern automotive technologies in their favor. Hypercars are getting sleeker and faster with better performance features, making the public and the wealthy take notice.

Although our odds of ever owning a hypercar in this lifetime are slim to none, we can still appreciate the beauty of a truly spectacular car. If you’re curious about what the world’s 10 best hypercars of all time are, have a look at our list.

The title for the fastest street-legal hypercar in the world belongs to the Aston Martin Valkyrie. This hypercar is also known by its code names Nebula and Am-RB 001, and only 150 units will be produced with production starting in September 2021.

Not only does this vehicle have an impressively sleek appearance, but it also has cutting-edge aerodynamics, space-age engineering, carbon fiber bodywork, a Rimac-built Kinetic Energy Recovery System, and a 1:1 power to weight ratio. Additionally, this beautiful two-door coupe features gull-wing doors and a rear-wheel-drive layout.

The Aston Martin Valkyrie is a fully hybrid hypercar with a cutting-edge 6.5-liter Aston Martin Cosworth naturally aspirated V12 engine with a 7-speed single-clutch automated manual Ricardo transmission. This vehicle can produce a tear-inducing 1,160 horsepower and can reach 0 to 60 mph in less than three seconds. Moreover, it has a top speed of 250 mph. 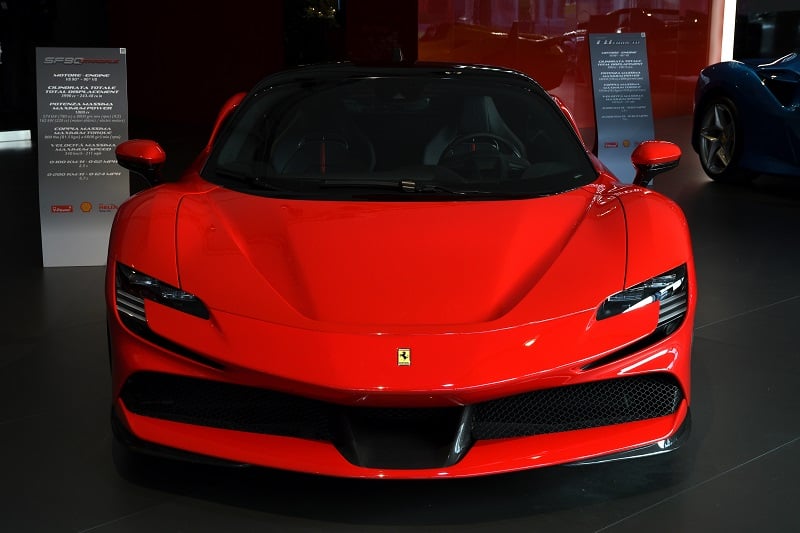 One of the best hypercars manufactured by Ferrari is also its first-ever vehicle to feature plug-in hybrid electric vehicle architecture. Interestingly the Ferrari SF90 Stradale is also the first Ferrari model that starts and drives silently. It also has a beautifully integrated drive train, impressive performance features, superb drivability, and agility.

This hypercar is significant because of it being Ferraris’ flagship into hybrid technologies. With the Ferrari SF90 Stradale, new technologies have been implemented to produce a truly spectacular vehicle that has provided vital knowledge that will go a long way in keeping Ferrari at the top of the hypercar game.

The Ferrari SF90 Stradale has no fuel economy play, but it’s Ferraris’s fastest and most powerful car in their product line. This hypercar has a twin-turbocharged 4.0-liter V8 engine. It’s equipped with a trio of electric motors that combine to allow it to produce 986 horsepower.

This hypercar can accelerate to 62 mph in approximately 2.5 seconds, and it has a spectacular top speed of 211 mph. Additionally, the Ferrari SF90 Stradale has a faster lap time than the LaFerrari models. It’s reportedly 0.7 seconds quicker. 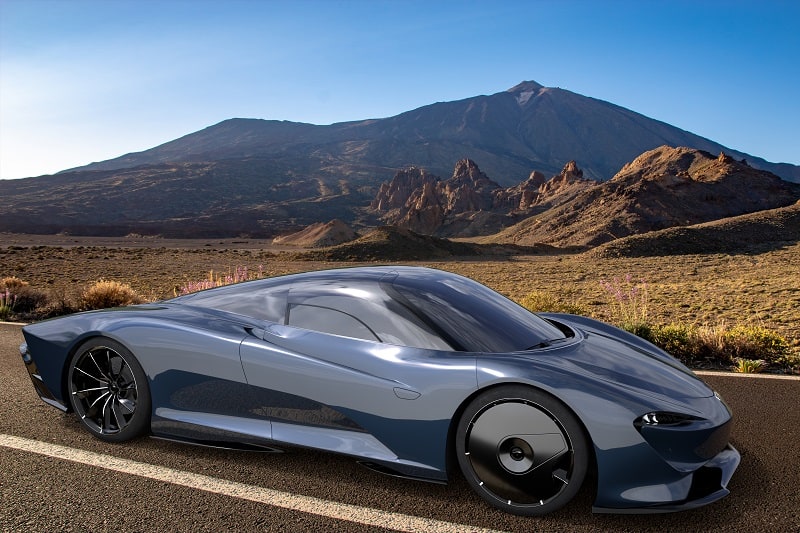 The McLaren Speedtail is the world’s first-ever Hyper-GT, and it’s McLaren’s most aerodynamically efficient car while also being the fastest McLaren vehicle to date. This luxury hypercar offers fans incredible performance capabilities housed in a beautiful body. Only 106 McLaren Speedtails will be produced, and each one of them is already spoken for.

The McLaren Speedtail has a highly stylized two-door coupe body and a hybrid powertrain that generates an incredible 1,035 horsepower. This hypercar comes with a host of incredibly modern features. There are high-definition digital cameras that discreetly slide out of the doors and act as side mirrors along with a carbon fiber driver’s seat. Additionally, inside this model, the cabin is draped in exquisite lightweight aniline and semi-aniline leather.

In terms of performance, the McLaren Speedtail does not disappoint. It’s equipped with a 4.0-liter twin-turbocharged V8 engine as well as an electric motor. The engine allows the Speedtail to accelerate from standstill to 186 mph in under 12.8 seconds. 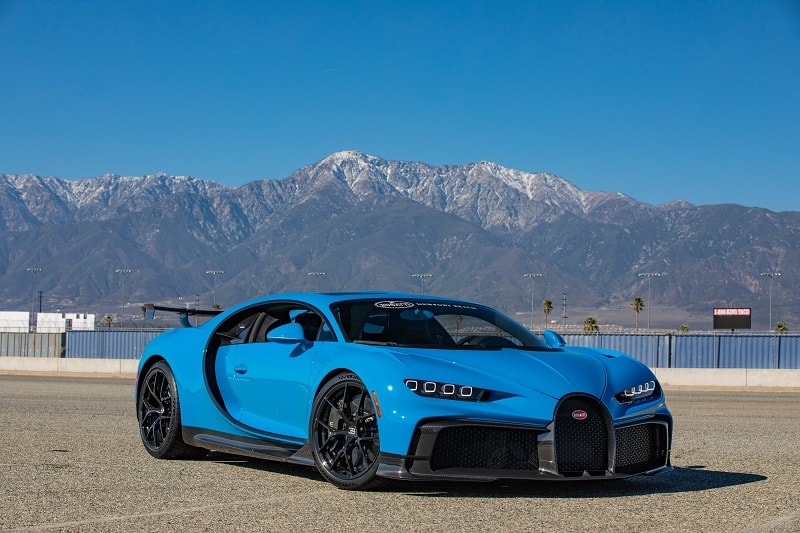 One of the most elegant hypercars to exist is the Bugatti Chiron. The Chiron models are Bugattis’ fastest, most powerful, and most exclusive hypercars in Bugattis history. One of the most notably intriguing features of this model is the Skyview option which provides drivers with an incomparable three-dimensional experience.

Every Bugatti Chiron is one of a kind, with the company working closely with buyers to create a hypercar that fits their personality. There’s a vast selection of color and material options available, and customers can choose to embroider or engrave specific spaces on the car to add a finishing touch.

Amazingly, 800 liters of water circulate through the heart of a Chiron model per minute. This feature guarantees the engine is cooled and allows it to continue generating extraordinary power. This model also features a new and improved titanium exhaust system that reduces backpressure while improving performance.

The Bugatti Chiron has a turbo-charged 8-liter W16 engine that can produce an astonishing 1,500 horsepower with an almost linear power output of between 2,000 and 6,000 rpm. On average, the Bugatti Chiron is capable of a top speed of up to 261 mph and can get to 60 mph in only 2.3 seconds. 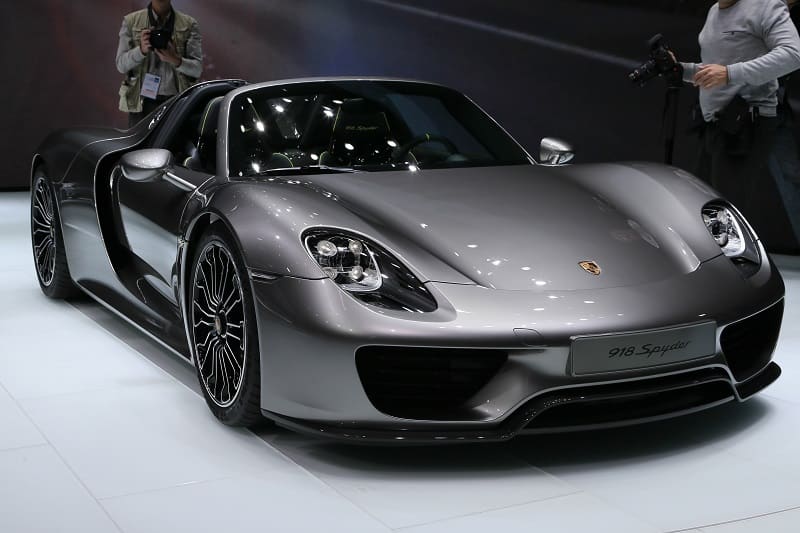 One of the most complete hybrid hypercars currently in existence is the Porsche 918 Spyder. This car is an all-wheel-drive, all-weather masterpiece. Only 918 of these hypercars were produced, making them incredibly sought after by hypercar collectors.

The Porsche 918 Spyder is one of the most usable hypercars due to its superb powertrain and all-around mastery. Unlike other prominent hypercars, this model has a two-seat roadster frame that’s almost entirely made out of carbon fiber, contributing to its efficiency. This model also hosts an onboard computer that is capable of automatically selecting the best driving modes.

Additionally, the Porsche 918 Spyder features a 4.6-liter racing V8 engine capable of producing 875 horsepower, 9,000 rpm, and 944 pounds of torque per foot. There are also two electric motors in this plug-in Porsche Spyder.

Unlike other hybrid hypercars, this model has a 6.8Wh battery that allows the car a range of 12 miles. Moreover, the Porsche 918 Spyder can hit 62 mph in under six seconds on electricity alone. 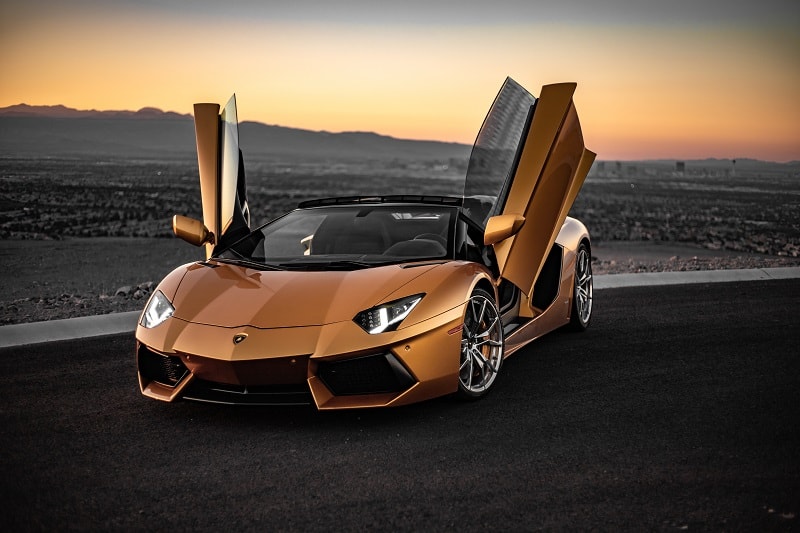 The Lamborghini Aventador is a mid-engine all-wheel-drive, two-door coupe with scissor doors and an ISR automated manual 7-speed transmission. This hypercar has a carbon-fiber structure and a naturally aspirated multi-point injection 6-liter V12 engine.

Although the original Aventador isn’t as powerful as some of the newer hypercars, it’s definitely worth mentioning. This classic model has an impressive top speed of 217 mph and can deliver up to 720 horsepower and 507 pounds of torque per foot. The Aventador also features some of the best interior design features. 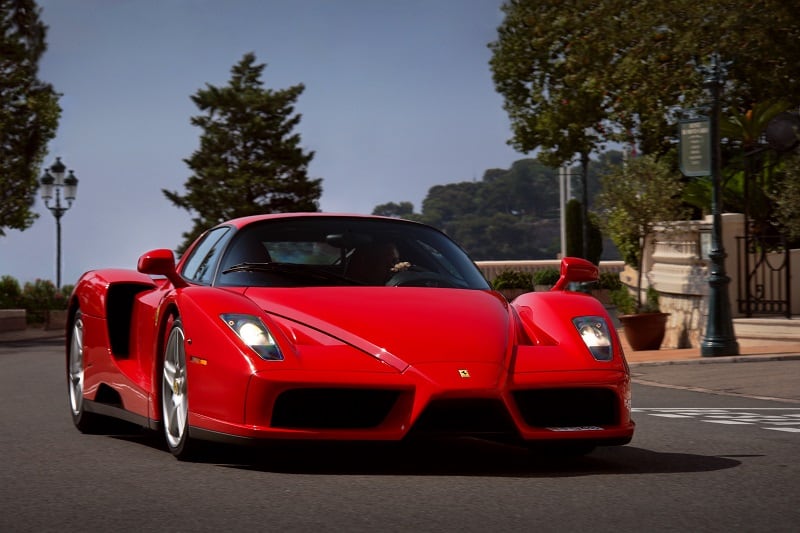 Almost 20 years after its production ended, the Ferrari Enzo is still considered one of the world’s best hypercars. The Enzo models have everything a car needs to be considered a hypercar. Its rarity, performance capabilities, appearance, and mouth-watering sound make it a much sought-after luxury Ferrari model.

There were only 400 Ferrari Enzos ever made, and many believe the Enzo to be Ferrari’s first true hypercar. These models incorporate carbon fiber construction and are equipped with active aero, tech-like traction control, and carbon-ceramic brakes.

Additionally, the Enzo has an automatic manual single-clutch six-speed F1 transmission that’s capable of shifting in 150 milliseconds, which was shockingly impressive for the time. The Ferrari Enzo features a 6.0-liter V12 engine that reaches a top speed of 221 mph. Moreover, this classic hypercar can accelerate to 62 mph in 3.14 seconds. 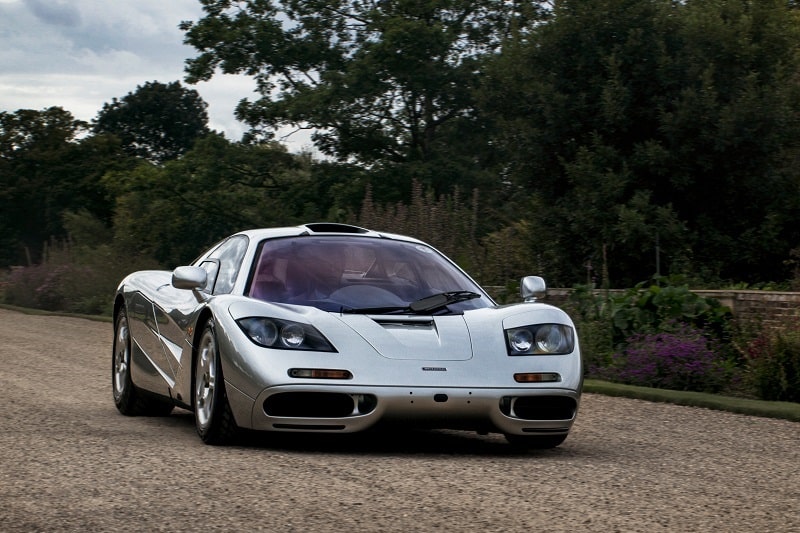 Arguably, the McLaren F1 is one of the most legendary hypercars in existence. In fact, many experts and hypercar enthusiasts believe the McLaren F1 was a hypercar before the concept even existed.

The Mclaren Design team created the F1 to be a road warrior, and its impressive performance features allow it to remain one of the fastest naturally aspirated cars globally. This model has a carbon fiber body and a state-of-the-art power train way ahead of its time. It isn’t hard to believe that this hypercar paved the way for vehicle manufacturers. Unlike other hypercars, the F1 features an additional seat, but this doesn’t detract from its streamlined structure.

This two-door coupe was designed by respected automobile designers Peter Stevens and Gordon Murry. It features a rear mid-engine layout and is a rear-wheel drive with a six-speed manual transmission.

Additionally, the F1 had a 6.1-liter engine that was able to produce 618 horsepower. Moreover, the McLaren F1 has a top speed of 240 mph with an average speed of 168 mph. 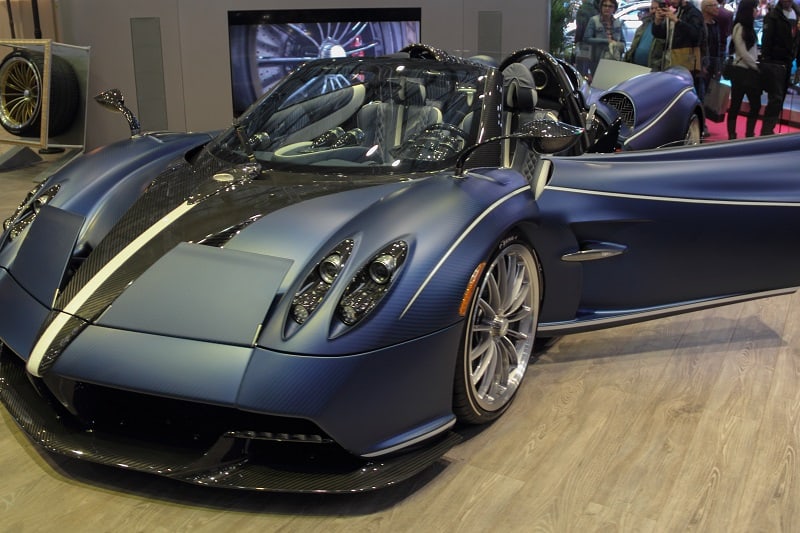 The most exotic hypercar on our list is the rare Pagani Huayra. Interestingly the Pagan Huayra is an Italian-built hypercar that is equipped with a German engine. This model was crafted by Horacio Pagani himself, who went into designing this fierce car with the mindset that he needed to create the perfect vehicle.

With that mindset in place, it’s unsurprising that the Pagani Huayra is a modern masterpiece. This model needed more than 4,000 design aspects to be woven together, but the end result is spectacular. The Pagani Huayra features incomparable build quality, extensive attention to detail, and impressive road behavior and handling.

The lightning-fast Mercedes AMG twin-turbo 6.0-liter V12 engine that’s equipped in this model allows the hypercar to produce 791 horsepower. Additionally, it has a top speed of 236 mph and can reach 62 mph in an awe-inspiring 2.2 seconds. 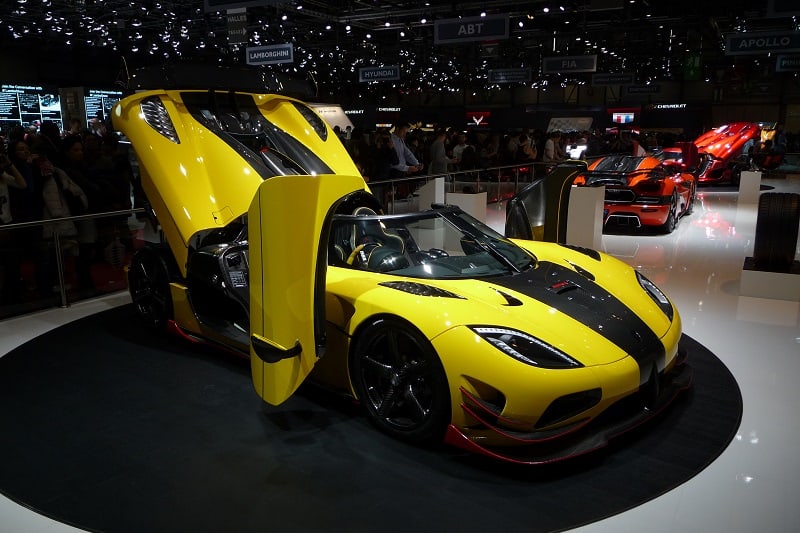 A little-known fact about Koenigsegg is that they were the first-ever hypercar manufacturer to move towards green technology. The Koenigsegg Agera RS is definitely one of the best examples of a hypercar that runs on biofuel.

The Agera is equipped with an upgraded fuel and engine management system that lets it use 95 octane or E100 biofuel. Interestingly, this management system can adjust the engine’s operation quickly and efficiently according to the fuel mixture it senses. Additionally, the Agera models were the first to be equipped with Koenigsegg’s very own ceramic piston brake system.

Contrary to popular belief, the Agera RS is one of the fastest production cars on earth. This model is a rear-wheel drive that has a 7-speed dual-clutch transmission. It features a 5.0-liter twin-turbo V8 engine and can produce 1,176 horsepower and 940 pounds of torque per foot. Impressively, the Agera RS can reach 60 mph in under 2.9 seconds.

What if Your Dating History Isn’t a Coincidence?

5 Characteristics of Athletes You Need for Business Success

5 Characteristics of Athletes You Need for Business Success

5 Powerful Questions to Transform Your Life

If Borat Were Seeking Enlightenment He Would Be ‘Clairevoyant’

What Each Zodiac Sign Should Stop Putting Up With In Relationships

5 Things You Need To Know About Dating

The 50 Best Hobbies For Couples