During the 80s, the term supercar truly became a concept. The supercars of this era featured mid-size engines that were faster than ever and had a unique style that is still revered to this day. Although this list features a few of the uber-popular sports car models, it also has a few lesser-known gems that deserve to be recognized.

If you’re not lucky enough to ever drive or own one of these exceptional cars, you can at the very least enjoy reading about these vintage beauties. We’re going to have a look at why each of the below supercars were popular and what makes them so memorable that they remain in the hearts and minds of car enthusiasts the world over.

Starting our list out strong with one of the absolute best sports cars of the 80s is the Ferrari F40. This iconic vehicle instantly became the most desirable supercar of the late 80s and overshadowed most of the other popular sports cars of the era. It’s believed the inspiration behind this model came from the B-Rally class scene that was immensely popular at the time.

The Ferrari F40 was built from 1987 through to 1992 and was actually developed from the experimental model GTO Evoluzione. When it came out, it was the most expensive and powerful model manufactured by Ferrari.

Unlike other models, the body was made exclusively out of carbon fiber, durable kevlar, and Nomex refractory material. The floor, roof, and doors were mostly made from composite materials, which increased the body stiffness by 20%. Interestingly the interior of the Ferrari F40 was spartan and didn’t even possess proper door handles.

Some of the notable technical specifications of the F40 included an eight-cylinder twin-turbo engine that had 32 valves and a high engine pressure ratio of an incredible 1.1 bar. The engine was capable of generating 478 horsepower and 7000 rpm.

Additionally, the F40 also had elements of a formula one car with its electronic fuel injection and IHI turbochargers. Furthermore, this supercar was the first in the world to exceed 200 mph. 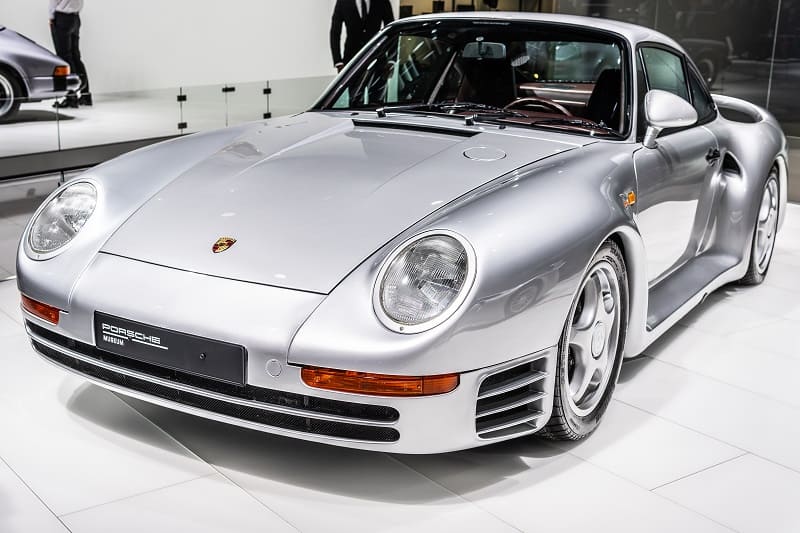 Many things in life might not seem worth the wait, but the Porsche 959 certainly was. In 1983 the car manufacturer revealed a concept supercar that became the basis for the Porsche 959. It wasn’t until 1986 that the Porsche 959 concept became a reality after years of waiting. It was in production from 1987 until 1993 and represented one of the true technological powerhouse cars of the time.

The Porsche 959 had a distinct new look that was wholly unique from other models the brand had released. After its developmental stages, the 959 was revealed to have a rounded body shape that featured distinguishable air intakes at the front and rear wheels.

Additionally, this technologically advanced supercar utilized a powerful 2.8-liter twin-turbo six-cylinder engine capable of generating 444 horsepower. The Porsche 959 received power to all four wheels from a specially designed manual transmission that featured five forward speeds, a reverse gear, and an extra all-terrain gear. At the end of production, it’s estimated there were only 345 models ever made, making this a collector item. 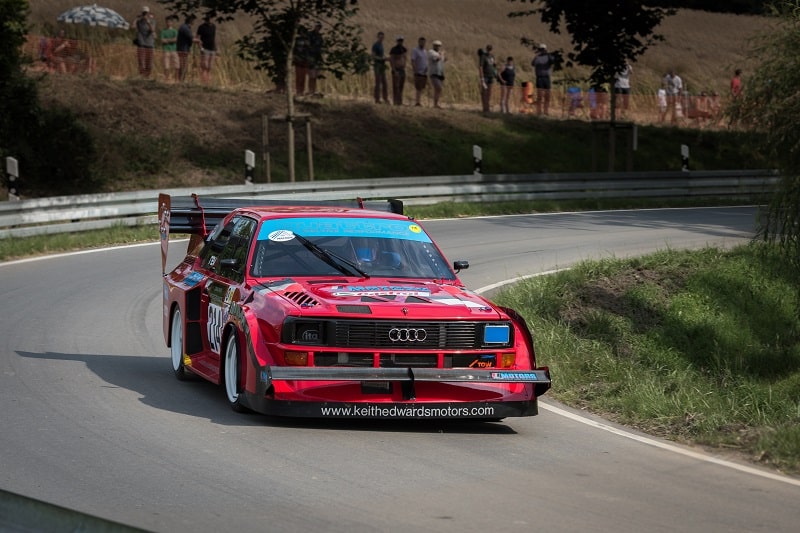 The first Audi Quattro made its debut in 1980 and was discontinued in 1991. The Audi Quattro S1 had a striking coupe-style. It was easily distinguishable from the other supercars of the 1980s because of the Audi logo that was placed on its doors and front grill.

Despite the Audi Quattro S1’s exhilarating power, it managed to maintain a low weight of 2,777 pounds which helped the car achieve 23 victories in a short five-year period. The Quattro S1 rally supercar had a 2.1-liter turbocharged five-cylinder engine that had 444 horsepower. Impressively, the computerized ignition and intercooler boosted the turbo and allowed it to run at 0.85 bar instead of 0.75. 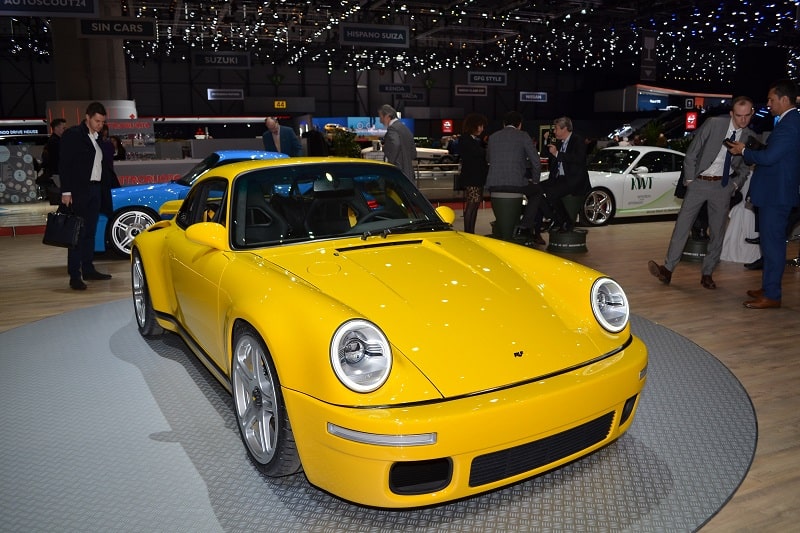 One of the greatest supercars ever manufactured was the Ruf CTR Yellowbird. This car held the unofficial Nurburgring Nordschleife track lap record with an extraordinary 8.05-minute benchmark. The CTR Yellowbird’s design and technical specifications changed the supercar landscape dramatically towards the end of the 80s.

The CTR Yellowbird was a limited production supercar that was first introduced in 1987, and its unique design was actually based on a Porsche 911. Unlike the model it was based on, the Yellowbird was safer because of its integrated roll cage and lightened body panels.

Additionally, the CTR Yellowbird utilized an upgraded, enlarged, and professionally tuned version of a Porsche 3.2-liter six-cylinder engine that increased the horsepower output to a whopping 463. The supercar also featured a custom-designed transmission, upgraded braking and suspension system, a side-mounted oil filter, and a polyurethane bumper.

The upgraded engine and streamlined redesigned features allowed the 1980s CTR Yellowbird to achieve a top speed of 213 mph. Moreover, this supercar was capable of achieving 0 to 60 in 3.65 seconds flat. 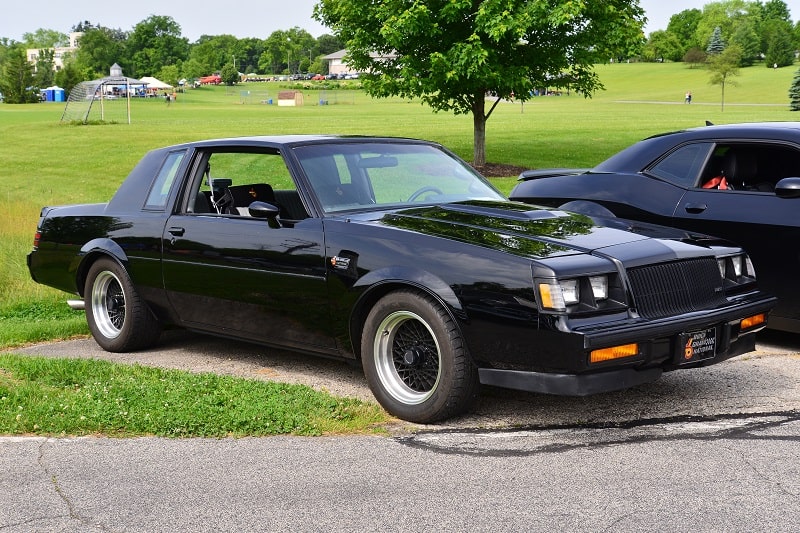 The 1987 Buick GNX is one of the most rugged, monstrous, and powerful supercars manufactured during the 1980s. In 1987 General Motors was phasing out the popular G-body chassis but decided they needed a fitting send-off for the legendary chassis design. Thus they manufactured the Buick GNX, otherwise known as the Grand National Experimental.

There were only 547 GNX models manufactured that were sent to McLaren for extensive modifications to the body, the performance, and the interior. For starters, the engine was a 3.8-liter turbo V6 that produced more than 300 horsepower. It also featured a recalibrated engine control module.

With the increased power that the modifications created, the Buick GNX needed suspension upgrades. Some of the suspension features that stood out included aluminum rear axle housing and a longitudinal torque ladder bar. 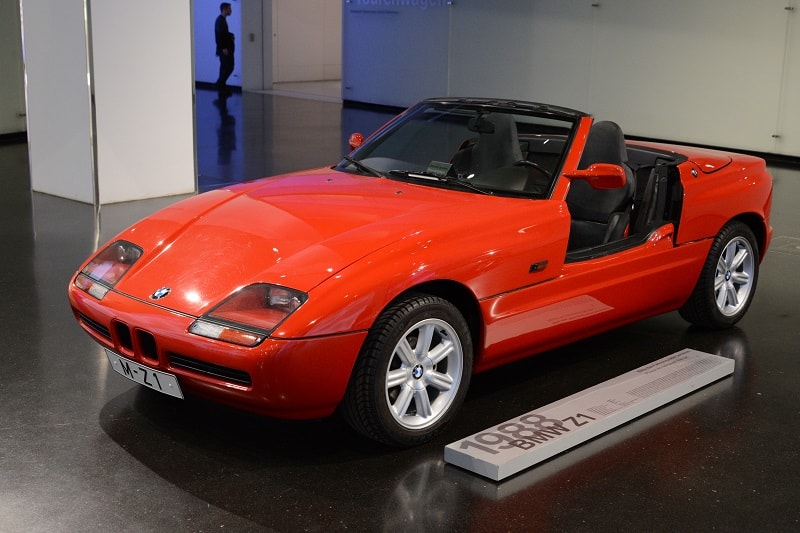 The title for a supercar with the weirdest doors has to go to the 1989 BMW Z1. This supercar might not be as powerful as some of the other models on this list, but it’s perhaps the most distinctive.

There were limited models of the two-seater convertible BMW Z1 produced between 1989 and 1991. The unique design of the Z1 has made it not only memorable but also recognizable. It was one of the only supercars to use plastic body panels and unique vertically sliding doors that dropped into the door sills.

One of the standout features of the BMW Z1 was the rear suspension multi-link arrangement that later paved the way for other BMW models. Although the 2.5-liter straight six five-speed manual transmission engine wasn’t very powerful, it allowed for impressive handling. 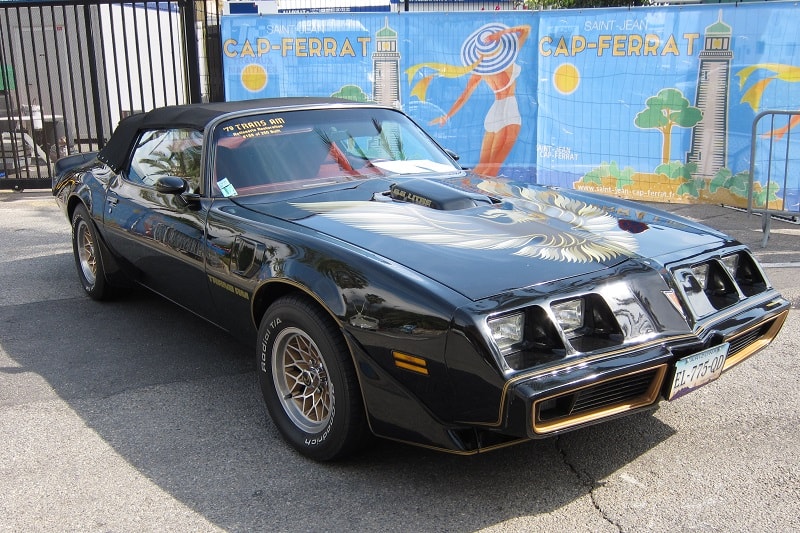 It might be fairly challenging to believe, but the 1989 Pontiac Turbo Trans Am was the fastest American supercar of the 80s. This vehicle had a limited production of only 1,555 units and was built to celebrate the 20th anniversary of Trans Am models.

The spacious interior of the 1989 Pontiac Turbo Trans Am was delightfully peculiar. It featured buttons laid out around the steering wheel, and it had comfortable sports seats. Additionally, the 20th anniversary model also had air conditioning and visually appealing saddle leather that matched the door panels and carpeting.

Surprisingly this 1989 supercar was able to hold its own against more technologically advanced Italian and European supercars in terms of reliability and efficiency. The Pontiac Turbo Trans Am utilized a Firebird GTA chassis and a 3.8-liter turbocharged V6 engine.

This automatic engine produced almost 300 horsepower and 340 lb-ft, which was quite the achievement compared to the standard V8 engine Pontiac was using. This vehicle has a maximum speed of 153 mph and can accelerate from 0 to 60 mph quickly in around 4.6 seconds. These specs solidified the Pontiac Turbo Trans Am’s position as the fastest US acceleration production supercar of 1989. 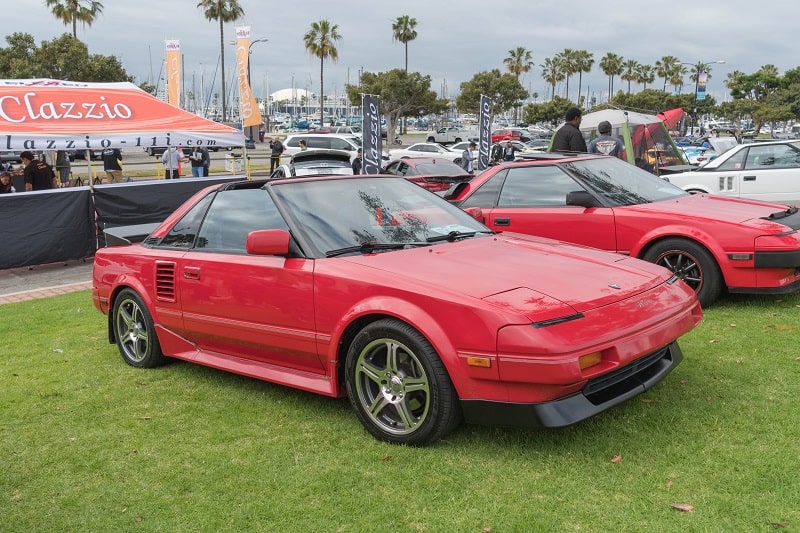 The Toyota MR2 was a small yet mighty supercar designed by Japanese automobile engineers to be efficient. The first MR2 was launched in 1984 and was well-received due to its lightweight and basic yet trendy design.

Although it might not seem like a supercar at first glance, the Toyota MR2 was engineered with advanced construction features and contemporary cutting-edge technology. One of this vehicle’s most attractive features was the excellent handling that allowed it to keep up with more powerful cars like the Porsche 944.

Even in the 1980s, sports cars were not cheap, but the Toyota MR2 was one of the more budget-friendly supercar options in part because of its well-thought-out technical specifications. The MR2 had a 16 valve twin cam 1.6-liter engine that generated 112 horsepower. Additionally, it featured a five-speed manual gearbox and a functional rear spoiler. Furthermore, this model was capable of going from 0 to 60 mph in 8.4 seconds. 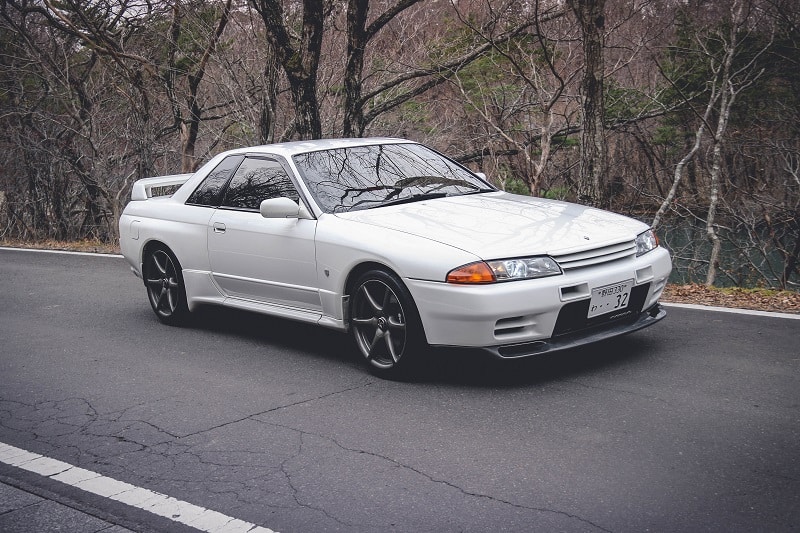 During the late 80s, the Nissan R32 Skyline GT-R was one of the most sought-after supercars globally, but it was never sold in America due to emission restrictions. Fortunately, times have changed, and this beautiful car can now be legally imported.

Many supercar fanatics argue that the 1989 Nissan R32 Skyline GTR is still the highlight for the renowned automobile brand. This 1989 model was able to win the Japanese Touring Car Championship four years in a row, a feat that many other supercars never achieved.

The R32 Skyline GT-R is an all-wheel-drive vehicle that features the famed Nissan RB26DETT inline six-cylinder engine capable of generating 280 horsepower. To this day, the R32 Skyline GT-R can still compete with many of the supercars on the market, as its adaptable handling remains one of its more impressive features. 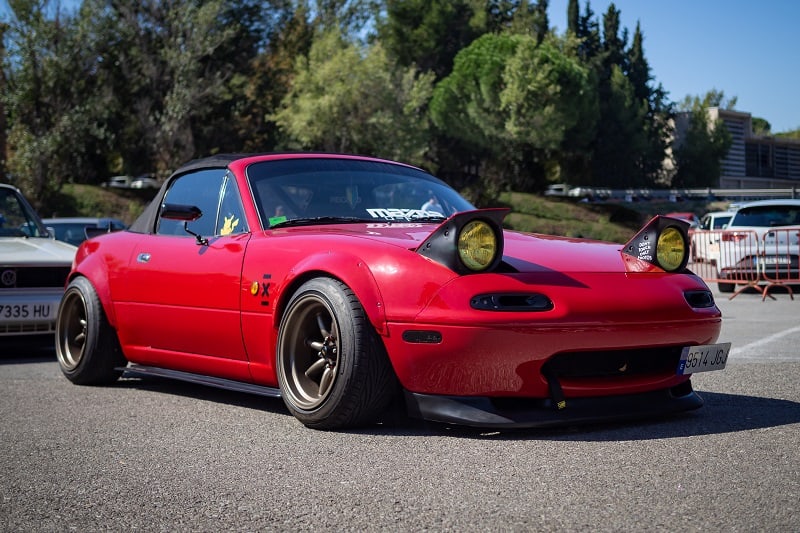 Many 1980s sports cars were somewhat intimidating to drive, but the Mazda NA MX-5 stood out from the crowd with its friendly usability. Additionally, it might not have been the most powerful supercar, but it was known for its reliability and aesthetically pleasing qualities.

The Mazda NA MX-5 was first produced in 1989 and stayed in production until 1997 because of its immense popularity. British engineers went all out with the appearance of this two-seater vehicle. They designed it with distinguishable pop-up headlights and a manually folding top that could be raised and lowered in a matter of seconds.

For a small supercar, it had an impressive 1.6-liter twin cam engine with 16 valves and four cylinders. The engine generated 116 horsepower and could reach 0 to 60 mph in approximately 8.6 seconds.

The legacy of the Mazda MX-5 has lived on thanks to the 1989 NA model. In 2016 the millionth MX-5 was built, and the supercar continues to be regarded as a benchmark vehicle in terms of handling and technical capabilities.

A Ray of Hope in the Arab-Israeli Conflict

Ask Yourself These 7 Questions Before Giving Them a Second Chance

Ask Yourself These 7 Questions Before Giving Them a Second Chance

My Friend Was the Trophy Boyfriend of a Narcissist

The Best Wine To Have With Chicken

Advisors Considering Making a Move: Begin with The End in Mind

Everyone’s Going to Hawaii, and the Resorts Aren’t Ready

Loki Joins Agent Mobius on a Mission in ‘The Variant’

When To Seek Professional Help for Social Anxiety Disorder