Absinthe is rapidly growing in popularity again after the US ban on the hallucinatory” spirit was lifted in 2007. Since then, beloved old brands and emerging new entrants have created a brilliant range of the bright diamond green liquid to rival the golden era during the French Belle Epoque.

If you’re looking for ways to enjoy drinking absinthe make sure you read our Beginners Guide to the Green Fairy.

The simplest traditional serving of absinthe consists of slowly diluting the spirit by way of an absinthe fountain or carafe with three to five parts ice water and a sugar cube through a perforated absinthe spoon.

Check out the 10 Best Absinthe Brands to try below. You’ll find a few of these will rapidly become favorites as you apply absinthe to cocktails and mixers, or if brave, slam down as a pre-party shot!

Vieux Pontarlier Absinthe Francaise Superieure is one of the world’s most highly decorated spirits and perhaps the most unlikely “grain to glass” spirit expression that you’ll find.

It’s vintage absinthe crafted in the French city of Pontarlier using the distillery’s original recipe, with no artificial colors or sweeteners added.

The absinthe is made from locally-grown Artemisia Absinthium (a type of grand wormwood), green anise seed, provençal fennel seed, and a secret blend of other aromatic botanicals.

Vieux Pontarlier Absinthe Francaise Superieure has a medium green color, the bright aroma of anise, and the flavor profile of alpine spice, light wormwood, and mint. The finish touches on layered anise and fennel along with more delicate herb flourishes.

Unless you’re able to claim the Czech style green fairy strong absinthe bottles (with a high thujone content that can’t be sold in the US) this is the best traditional absinthe for taste, price, and cultural cachet. 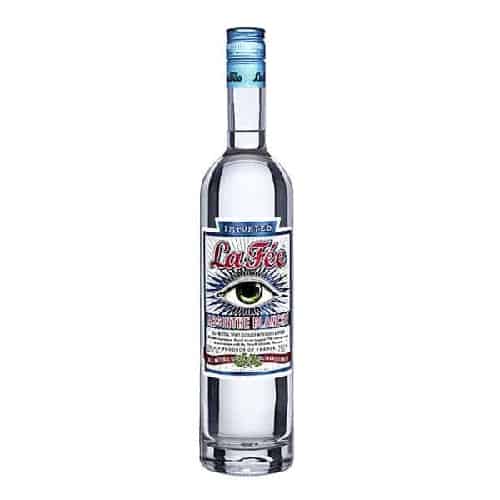 La Fee Absinthe Blanche Superieure was first distilled in 2011 in association with the Musee de l’Absinthe and its co-founder; recipe maker and curator Marie-Claude Delahaye.

Absinthe Blanche means this La Fee (there’s also a more traditional variation) lacks the traditional green color – it’s a clear absinthe. It’s both sweetened and slightly lower in alcohol content, having been described by the distillery at release as a more “feminine absinthe.”

It’s a dry, zesty take on traditional absinthe, with a less bitter profile from the sugar addition and around 10% less ABV than other absinthe but still packs a punch at 106 proof. It’s a great addition to a Sazerac cocktail and also popular when consumed with mineral water or via the absinthe drip. 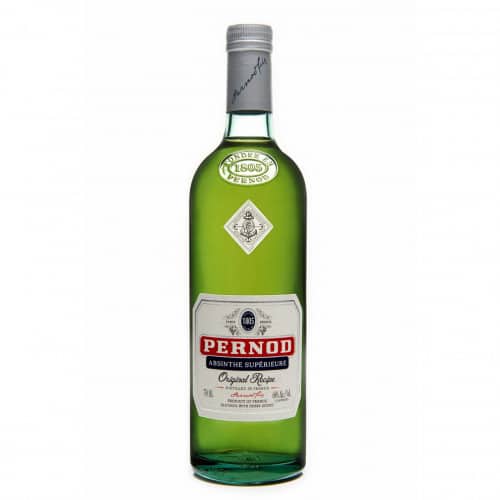 Pernod Fils was the most popular absinthe brand throughout the 19th century until it was banned in the US in 1915 due to the thujone content that was believed to cause hallucinations (and debauchery of all kinds).

The United States ban wasn’t lifted until 2007 – drinkers had to make do with Pernod Pastis, a simpler aniseed liqueur – when science proved small amounts of the thujone compound meant little in the way of hallucinations.

Pernod Absinthe still follows the original recipe and processes of Henri-Louis Pernod by using a secret bunch of herb botanicals to achieve its all-natural, vibrant green color and enjoyable taste.

Pernod Absinthe is sweeter and less complex than other expressions, containing more of a straightforward candy/licorice note, followed by a palate of star anise, vanilla, and hyssop.

The finish is slightly spicy with a hint of wormwood and is more gentle on the tongue than other varieties of the controversial alcoholic drink. 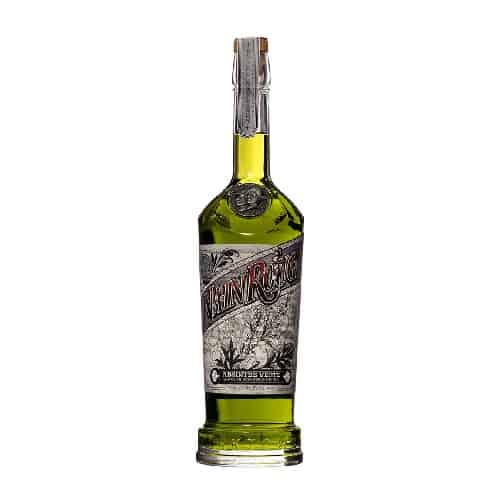 Two James is the first licensed distillery in Detroit since Prohibition and is located in Corktown, Detroit’s oldest neighborhood.

The aroma of Nain Rouge Absinthe Verte is subtly vegetal with tones of peppermint and flowers, balanced by the telltale flavor of anise and wormwood.

Nain Rouge Absinthe Verte is colored with peppermint, hyssop, and nettle to produce a beautiful rich earthy green color. If you’re looking to dazzle guests with an interesting, old-school-style American absinthe brand, this is a great bottle to choose. 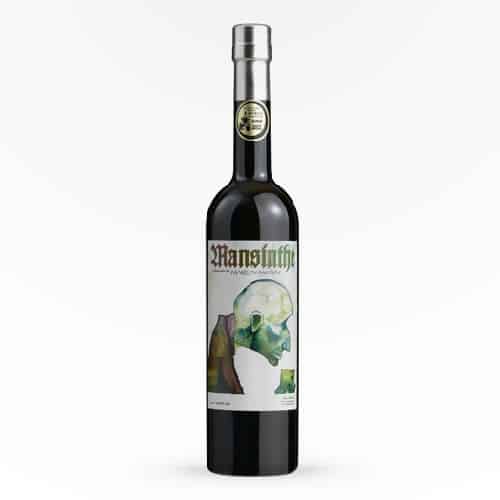 This one you may have heard of, given that it’s owned by shock rocker Marilyn Manson, who has been a long time fan of real absinthe, carrying a glass of it around with him everywhere when he first hit the big time.

This Absinthe is carefully distilled at Matter Luginbühl AG Distillery in Switzerland. It’s made with grand and pontica wormwood blended with pontica blended with fennel, anise, hyssop, and melissa. The wormwood and anise are dominant flavors, and at 144 proof Absinthe Mansinthe, it’s about as strong as a liqueur spirit can get.

Mansinthe is earthy and vegetal on the nose and palate, with sharp spice and accents of alpine herbs balanced against the heat and bitterness of the traditionally strong alcoholic drink.

A balance between wormwood and anise with some spicy heat going on. Some alpine herbs and earthy aromas are also felt in a buttery palate. 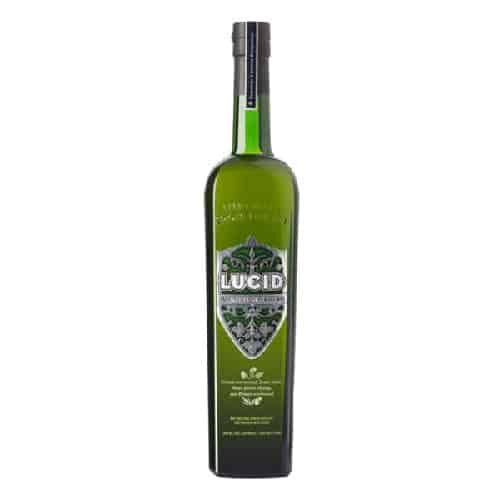 Lucid Absinthe Superieure was the first authentic absinthe (made with grand wormwood) to be legally available in the United States after the ban was lifted and remains a popular version of the drink.

The aromas are faint but well balanced between flowers, herbs, and spices. There’s heat on the palate along with the distinctive combination of wormwood, fennel, and green anise. The finish is gentle for absinthe.

If you’re a nervous novice in the initial stages of getting to know real absinthe then this bottle would be one I heartily recommend. You can always get into the wilder stuff the more practiced you become with the traditional absinthe fountain, louch, or cocktail. 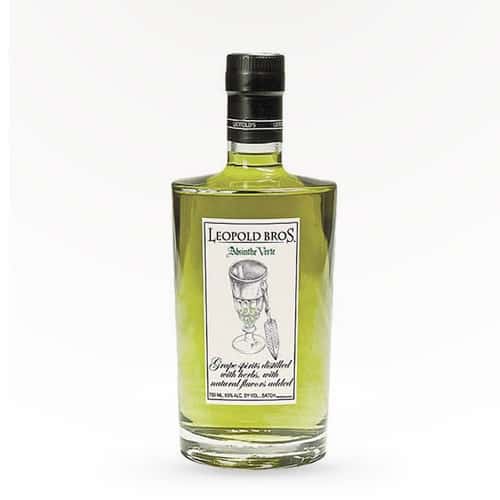 Leopold Brothers Absinthe Verte starts with a grape spirit (surprisingly Pisco, a type of brandy from Chile) and grand wormwood. Fennel, anise, and other botanicals are also added to the small-batch still to make a more complex, interesting spirit. Coloring herbs such as lemon balm and hyssop are steeped in the mix to give the green absinthe its signature color a blast of brightness.

The result is a brilliant emerald green spirit that’s the perfect touch for a classic Absinthe cocktail such as the Ernest Hemingway, Sazerac, or even the Corpse Reviver No. II.

Another creation from the Emile Pernot absinthe distillery, this absinthe Blanche expression is named after Auguste Junod, a famous distiller and pioneer aviator of the Belle Epoque (the decadent period in Paris from 1880-1914, when WWI commenced).

This clear absinthe gets its refreshing flavor from a profile of eight botanicals distilled in copper alembics specially designed and built for absinthe production.

They are the only stills of their kind in operation anywhere in the world and allow the company to produce absinthe of exceptional quality.

The absinthe tradition was popular among Parisian writers and artists. For the simplified version, serve 3 measures of chilled water (sin gas) dripped from an absinthe fountain over one sugar cube on a slotted absinthe spoon into 1 measure of Junod in the bottom of your absinthe glass. Perfection. 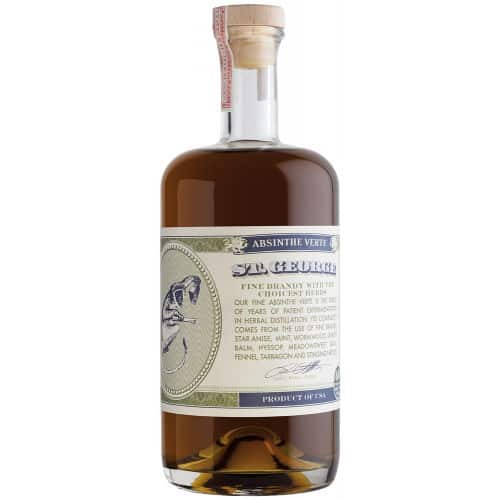 Another traditional absinthe from a brandy base, St George is infused with wormwood, fennel, star anise, tarragon, and stinging nettles (I’m not sure why the stinging nettles are in there, but there’s a first for everything).

Similar to the previously mentioned Lucid Absinthe, this version of the drink is more nuanced. Rather than going heavy on the licorice and aniseed flavor, St George Absinthe Verte aims to showcase lesser lights such as lemon balm, hyssop, mint, opal basil, and tarragon amongst others.

This is one of the best absinthe all-rounders, interesting enough for the absinthe connoisseur to enjoy, but also balanced enough to appeal to newcomers to the spirit. 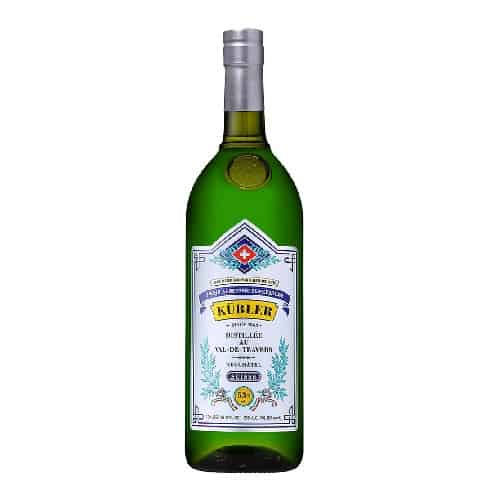 Kubler Absinthe has been in continuous distillation by the same family since its origin in 1863, in the birthplace of Absinthe, Val-de-Travers, Switzerland.

Its wormwood is sourced specifically from the unique terroir of the region and utilizes sage, mint, coriander, and a hint of white pepper alongside fennel and star anise.

Does absinthe cause hallucinations?

Absinthe is made using Artemisia absinthium, which is commonly referred to as wormwood. In wormwood, there is a compound called thujone, which is the ingredient that is supposed to send you crazy if you imbibe enough of it.

The much-hyped hallucinatory effects of thujone prompted absinthe’s prohibition until 2007 in the United States, but science has proven it does not cause hallucinations. The drunkenness caused by such a strong spirit (and copious amounts of sugar) can create these types of effects.

Why did absinthe first become popular?

During the Belle Epoque era (1880-1914) French wine culture was threatened by the pest known as phylloxera, which decimated vines and fruit.

Without wine, many French drinkers turned to the mysterious and scandalous liqueur known as absinthe, which was alleged to create hallucinations. It also involved a cool ritual that was popular with artists, writers, and musicians.

While it lost some popularity as the wine industry recovered, absinthe maintained a strong presence right up until it was banned in the United States in 1915.

What is an absinthe drip?

Pour an ounce of absinthe into a mixing glass loaded with crushed ice, making sure the ice level is above the absinthe. Place a sugar cube on top then (very) slowly drip soda ice water over the mixing glass until the sugar is dissolved. Stir together, then strain into a cocktail glass or highball.

Am I Ruining My Friendships?

How Employers Can Approach Spring Break in a COVID-19 World

Best Pillows for Every Sleeping Position

Beginners Guide: How to Drink Sake

What Being Ghosted Says About You (and What It Doesn’t)

The House of Doors Is a Desert Oasis

Am I Ruining My Friendships?

How Private Banks Can Succeed In The Digital Era

Her Stepdad Told Police She ‘Ran Away’. 10 Years Later TikTok Solved Her Murder.

Your Shadow Is Your Superpower

The First Ever Aston Martin DB4 Is Up for Sale

How To Make Healthcare Benefits Less Of A Headache