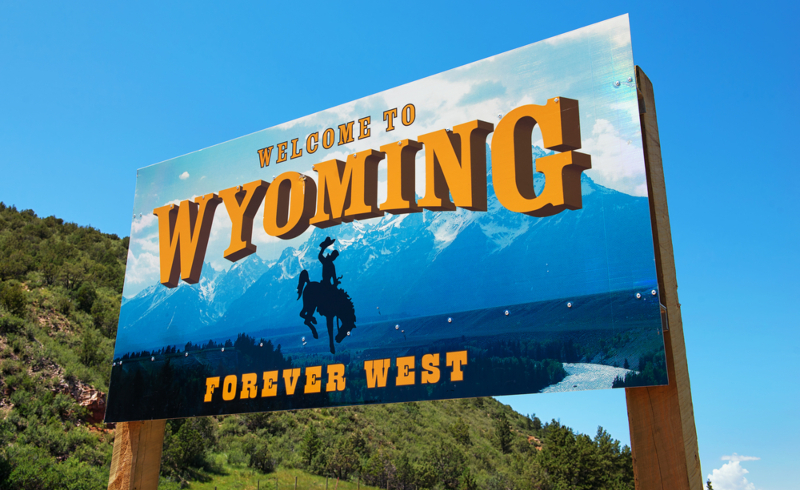 WHEATLAND, Wyo. — Brandon Graves said covid-19 arrived in Wheatland the way new movies do in this High Plains farming town: months after hitting the big cities and without much fanfare.

“It kind of trickled in and it never really exploded here,” said Graves, a lifelong resident and mayor of the town of about 3,500, the largest in Platte County.

Many residents say the virus that causes covid has felt more like an inconvenience imposed on them by outsiders than a public threat. For instance, utility bills came late because the company that prints them is in a city that was hit hard by covid. And the town is stuck repairing and re-repairing one of its aging trash trucks because the ordered replacement has been delayed by more than a year because of a covid-induced shortage in microchips.

Then there’s the “Colorado Navy,” the locals’ nickname for the parade of vehicles with boats in tow that cross the state line each summer. Their numbers swelled last year as people searched for lakes and campgrounds open during the pandemic, said Shawna Reichert, executive director of the Platte County Chamber of Commerce.

Campers were packed so tightly around Grayrocks Reservoir, a popular fishing spot outside of town, Reichert said, “it literally looked like a city.” The crowds trashed the place, and a rancher lost several cows. Plastic bags were found in their stomachs.

It’s no surprise many residents are lukewarm to the idea of covid vaccines: As of July 6, about 29% of Platte County residents were fully vaccinated, according to the state health department. And Wyoming, a staunchly conservative state, had about 32% of residents fully vaccinated, giving it one of the lowest vaccination rates in the nation. Perhaps also not surprisingly, the state has one of the highest new case rates in the nation.

What might be surprising is that Wyoming’s neighbor to the south has recently experienced similar case spikes, too. Colorado is a Democratic-leaning state whose population is about 53% fully vaccinated, placing it in the top 15 states in vaccination rates. It also had the 12th-highest rate of new cases among states as of July 9, ranking a few states lower than Wyoming.

Within Colorado, one of the most vaccinated counties is San Miguel County, which, like Wyoming’s Platte County, has a population of a little over 8,000 people. Both counties entered June with high transmission rates and sustained them for several weeks straight, but their vaccination rates are inverses of each other: Fewer than a third of Platte County residents are fully vaccinated, while about a third of San Miguel County residents are not. The common thread in both places: pockets of unvaccinated residents.

Health officials are keeping a close eye on covid hot spots that have emerged in recent weeks tied to low vaccination rates.

“One of the things that we’ve been sounding the alarm about is the need for hyper-local data,” said Jennifer Nuzzo, an epidemiologist with the Johns Hopkins Bloomberg School of Public Health. “The state could look fine and you can think, like, ‘No big deal. We’ve got this.’ But then when you drill down at the county level, you could be seeing a much different story.”

The county level might not even be granular enough to show true risk. Small upticks in cases can be meaningful even in sparsely populated counties — and not just because of the potential for transmission to spill across county or state lines.

“Small rises in cases in rural areas can have devastating consequences because, chances are, there’s fewer health care resources in those places in order to save lives,” she said. “There’s been good studies that show that, partially, the ability of the virus to kill people depends on the bandwidth in the health system to save people.”

After months of reporting few cases, Platte County Public Health posted a warning on Facebook in early June that 14 people had tested positive for covid in the same number of days, and 12 ended up in the hospital.

That string of cases bumped Platte County into the “red zone” of high transmission rates. “Platte County contact tracing has shown that unvaccinated people are going to work and group gatherings while sick,” the post read.

Joan Ivaska, senior director of infection prevention for Banner Health, which runs a 25-bed hospital in Wheatland, confirmed that covid patients were admitted throughout June, though she declined to say how many. The hospital has only two adult intensive care beds.

She and other health officials continue to emphasize that better vaccine coverage is the only way to get back to normal.

The challenge, said Kim Deti, a spokesperson with the Wyoming health department, isn’t just the politicization of the covid vaccines, which has turned many against them, though that is a factor. It’s also that many people have resumed activities and believe the pandemic is behind them.

“We’ve had relatively low levels of covid-19 illnesses in most areas of the state for a while now, which affects threat perception,” Deti said. “There are many people working very hard and trying everything they can. Wyoming’s coverage rate is not for lack of effort.”

In San Miguel County, Colorado, people were fired up about getting shots from the outset. “Interest has been very, very impassioned since vaccines became widely available,” said county spokesperson Lindsey Mills.

San Miguel County hit President Joe Biden’s vaccination goal of getting at least one dose into 70% of adult residents weeks before July 4, the deadline the nation as a whole missed. Yet the county was experiencing a surge in covid cases similar to that of its Wyoming counterpart. More than 460 days after Colorado declared covid a disaster emergency, San Miguel County recorded its first covid death on June 14.

The reason? It turns out not everyone was as enthusiastic about the vaccines as San Miguel County’s high rates indicated. Numbers provided by the local health department show that on the county’s east side, home to the affluent ski resort community of Telluride, about 80% of eligible residents opted in. On the west side, what residents call the West End, only about half did. That left the county vulnerable to continued spread.

That east-west divide in San Miguel County reflects a preexisting cultural divide, according to Mike Bordogna, the county manager. The sparsely populated west side, which stretches to the Utah line, was historically the county breadbasket, growing crops and livestock that fed mining towns like Telluride, now known for skiing and its film and bluegrass festivals.

A KHN analysis of data provided by San Miguel County shows that, since the beginning of the pandemic, most of the county’s covid cases were on the east side, where most residents live. But in May, the tables turned. While the west side typically recorded less than 10% of the county’s cases over the first year of the pandemic, in May and June its share suddenly was more than 64%, aided by the arrival of the delta variant.

In late May, an unvaccinated woman in her late 70s living in the county’s West End caught the delta variant at a potluck following a funeral and died after a week in the hospital. Other unvaccinated funeral attendees caught the virus, too.

“Pretty much everybody that was there that was unvaccinated became sick after the fact — either tested positive or just became sick and didn’t test,” said Amanda Baltzley, contact tracing supervisor for San Miguel County Department of Public Health.

Sheila Grother, an EMT and contact tracer who works with Baltzley and has lived in the West End town of Norwood for more than 30 years, said she’s gotten nowhere trying to persuade people to get vaccinated — even though two vaccinated West End residents who contracted the delta variant around the same time as the woman who died, and were also over 70, recovered.

“I’ve been in people’s homes when they’re at their worst and I’ve been with them on their worst possible days,” she said. “I thought at one time that people, you know, trusted my judgment to some degree, and I think some do, but there are those that just — they’re not going to get the damn vaccine.”

But county leaders are holding out hope that some will have a change of heart. Bordogna said health officials are working on plans to set up surreptitious vaccination stations at the upcoming county fair and rodeo to make it easy for people to get inoculated without worrying about being spotted. The goal is to create a system in which attendees can, for example, tell a family member or friend they were heading for the bathroom and get a shot instead.

Back in Wheatland, few people were aware of the hospitalizations that happened in early June. Alice Wichert, who manages the Motel 6 in town, suspects most residents probably weren’t aware of a spike in cases at all.

“There wasn’t really anybody here who kind of had a strong fear of it,” she said. “We just pretty much went on with life.”

But that wasn’t the case for one temporary motel resident. Angela Brixius is a lab technician from Nebraska working a stint at the local hospital, where, among other things, she processes covid tests and regularly encounters patients convinced covid is a hoax.

“I worry about people that aren’t vaccinated who are out and about who talk to everybody that they meet about how this is not real,” Brixius said. “I meet people at the hospital: ‘I don’t need a swab. I don’t have covid. It’s not real.’”

“People are still dying of covid. It’s still going on, and it should be done,” Brixius said before heading out the door for food and fresh air before another 3 p.m.-to-midnight shift in the lab.
—

Log in if you wish to renew an existing subscription.

By completing this registration form, you are also agreeing to our Terms of Service which can be found here.

Are You Making These Mistakes When Thinking About Gaslighting?

What the Editors of 6000 Journals Tell Us About Gender, International Diversity, Open Access, and Research Transparency

Why You Need to Pace Yourself in a New Relationship

‘Go and Marry a Prostitute’

6 Relationships That Cause You to Overcommit

Credit Scores Are Not Created Equal: Why and How Credit Scoring Should Be Democratized