“This is the first Christmas we’ve had together in years.”

An ominous first line in the long-awaited official trailer! Clint is on the run, but Hailee Steinfeld’s new character, Kate Bishop, is in the spotlight.

Clint Barton didn’t handle “The Snap” well. When Thanos erased Clint’s family along with half the life in the Universe during Avengers Infinity War, he went of the grid and became “Ronin” a ninja clad vigilante that targeted crime syndicates and killed indiscriminately. 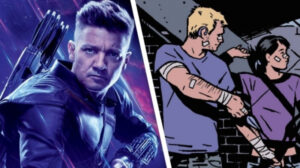 Marvels Hawkeye is based upon the recent run of the Marvel comic Hawkeye, Vol. 1: My Life as a Weapon (Marvel NOW!) by Eisner, Eagle, and Harvey Awards winner David Aja with illustrator Javier Pullido and Matt Fracton.

And in those five years, Clint made a huge amount of enemies throughout the criminal underground, now they are looking for payback!

Intro self-styled “The World’s Greatest Archer.” Kate Bishop (Hailey Stansfield) a 22-year-old protege on her own mission for retribution playing Robin to Clint’s grizzled Crusader, and both getting thoroughly walloped and gloriously dishing out comic book pain in the process of reuniting the Bartons for Christmas. The show looks like “Die Hard” meets “TDKR” which is kinda bad ass if you think about it! 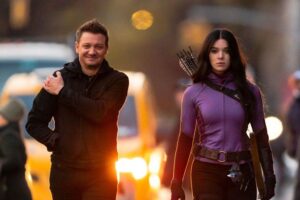 Rennet & Steinsfield as Barton & Bishop. Not pictured is the new Black Widow, Yelena Bolova (Florence Pugh) who is also featured in this series.

Hawkeye was created by Jonathan Igla (Mad Men), who is also the series’ head writer. The series will be directed by Rhys Thomas (John Mulaney & the Sack Lunch Bunch) and the duo Bert and Bertie (Troop Zero). The series also stars Alaqua Cox as Maya Lopez, aka Echo, a young Deaf woman who can perfectly mimic people’s movements, and Vera Farmiga as Eleanor Bishop, Kate Bishop’s mother.


With the new wrinkle that Yelena Bolova, Natasha’s sister in the Red Room and the new Black Widow (Florence Pugh) believes Barton is responsible for Nat’s death. This makes the upcoming Disney Plus Exclusive Series must-see tv! 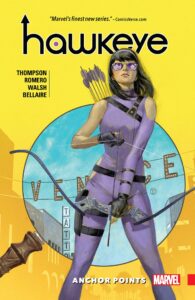 Collecting Hawkeye (2016) #1-6. Remember Hawkeye? No, not that Hawkeye – your favorite Hawkeye, the former Young Avenger, the butt-kicking hero who had to save that other Hawkguy all the time and basically keep his life in some semblance of order. Read Kelly Thompson’s Hawkeye run featuring Kate Bishop!

Check out the show when it premieres on November 24th!

A Future Of Refillable Cosmetics

Tom Hanks, a Robot, and a Dog Try and Survive the Apocalypse in ‘Finch’

5 Lies a Cheater Will Tell You

How to Keep the Promise of Affordable Housing in California

I Really Don’t Look Forward To Returning to the Office