Holding Court in the Hamptons

“If Shakespeare can compare all of life to a stage, maybe it’s not odd to believe that part of the play can take place on a basketball court.” Bill Russell

The Hamptons, the string of tony towns on Long Island’s East End, are well known for many things, such as its beautiful, pristine beaches, massive, well-maintained estates, and a sparkling restaurant, club and house-party scene frequented by the wealthy and the famous.

But, of course, there is much more.  And to enjoy all that this magnificent environment and eclectic ecosystem have to offer doesn’t require millions in the bank or your name on a select “let inside” list (full transparency, I have been on some lists to keep out).  For instance, majestic sunsets are free, stellar fishing from a pier requires only a reel and rod and some bait, and a walk or run on a quiet, winding trail through woods, fields or dunes can lead to all and any unexpected natural delights.

And then there’s basketball.  Yes, hoops are played in the Hamptons, on courts public and private, with the ferocity of competition at times equal to what might be seen on a Wall Street trading floor (not surprising, as the place is hopping with Wall Street traders).

I have been lucky, however, in that all the games I’ve been involved in have been populated by good men (nod to this publication). These are fellows who do play to win, and play hard as a result, but keep it congenial and fair, save for the few who call fouls based not on illegal contact, but because they missed a shot and want their team to keep the ball.

I started playing in earnest in the Hamptons at about the age of 15, during the summer when my family vacationed in Wainscott (birthplace of my father).   The “game” I frequented was on a court next to a one-room schoolhouse about a mile from our house.  The backdrop was a cemetery, and across the road was a sweeping field and a freshwater pond and after that the vast Atlantic.  It was marvelous scenery, but I cared more about the sun-bleached cement full court, the two metal backboards shaped like clamshells, and rims sporting just the right amount of rust to make the new white nets hung at the beginning of each season stand-out.

It was a great place to play, and for many years many people played.  The most attended games were on the weekends, right after five pm, after people had their fill of the beach or other recreational fun.  And more often than not, we played until dark.

I can’t tell you how much that game meant to me, something to look forward to and a way for me to develop my skills.  And after graduating from college and starting to age, it helped keep me in shape – physically and mentally.   But most importantly, I made friends, lasting relationships born from bouncing a ball together.

And there were many memorable highlights, including having Julius Erving show up one evening (with his agent), and my getting the chance to play on the “Doctor’s” team.  (By the way, he had the largest hands I have ever seen, making my own hand look like a toddler’s when he enveloped it in a friendly shake after we were finished).

But as I got older, the game started to fade, and then, sadly, it was over entirely when the court was removed with the addition of a second building to accommodate an increase in students.

One evening, missing the action, and longing to shoot, I ventured to the nearby town of Sagaponack, which also had a one-room schoolhouse, and on its grounds a half-court.  The basket was very low, a shade under 9 feet, allowing me the chance to dunk the ball (now, I would need a ladder and a boost to slam it down at that height).

So I was shooting by myself and squeezing in some uninspiring jams when another car pulled up and a nice-looking gentlemen in hoop gear got out.  He walked over, introduced himself, and asked if I wanted to play “one on one.”  I didn’t see why not, and we played two or three games, with him hitting almost all of his shots.  After we were done, he told me about a game he had on Sunday mornings at a full-court he owned on his property, and invited me to play.  It was then I realized that he had seen me while driving by and had challenged me to play as a way to “size me up,” to see if I was right for his game.  And I guess I passed.

Since then, I have been a habituate of this great game whenever I find myself in the Hamptons for a weekend.  Derek Schuster, the man who had invited me to play, is without a doubt the most determined and diligent “Commissioner” of pick-up runs on the East End – or anywhere for that matter.  In fact, the game has been ongoing each summer since 1976, with the only break being last year because of Covid.

Keeping a game going for four decades requires skill and charisma and a great love of the game. Derek has that and more (he also has an amazing fall-away jump shot).  He is a kind-hearted man, a social justice warrior, and a philanthropist.  Also add to that a writer, as he recently completed a new parenting book (he is shopping for agents/publishers) titled YOUTH IN JEOPARDY, KEEPING KIDS OUT OF TROUBLE.  The book offers an alternative to others dealing with juvenile misbehavior. Instead of presenting dry academic studies, the text draws on his twenty years of violence prevention work as Associate Executive Director and Program Director at SCAN-Harbor in the Bronx and East Harlem.

But back to hoops.  The other day, after a Sunday run, I asked Derek the following questions about the game and his involvement, thinking it might be useful to others who might want to consider starting up a run of their own.

Why did you start the game?

Derek:  For exercise, competition and camaraderie.

What is the greatest challenge to keep the game going?

Derek:  The need to keep recruiting younger players to keep the level of play consistent. Age of players goes from teenagers on up.

What are some of the most memorable highlights?

Derek: One Sunday, the art dealer Vito Schnabel said, “Next week I’m going to bring Steve Nash.  He was still at the time an NBA player, having come off two MVP seasons (He’s now head coach of the Brooklyn Nets).  Not believing this, one of the players shot back, “Make sure Kobe comes along too.”  But the next Sunday, Vito came and with him was, indeed, Steve Nash.  He won every game he played but being a gentleman, always by one point. 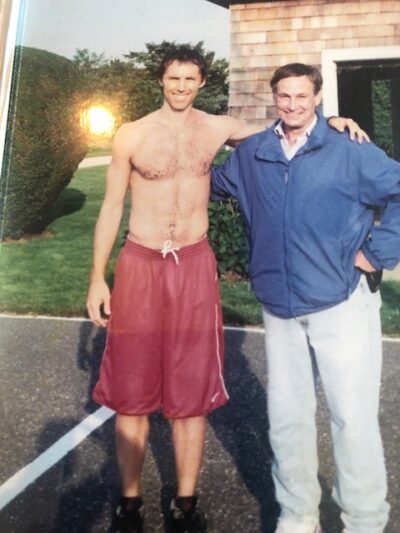 This summer, gratefully, the game is back in business and we’ve already had some spirited contests.  It feels good to be back competing, and while my joints are not as loose as they once were (more like locked in place), my soul is happy to be back with friends in a friendly game.  Of course, I still like to win.  But hey, just having a ball in hand, a defender in front of me, and a hoop to shoot, is victory in itself.

The post Holding Court in the Hamptons appeared first on The Good Men Project.

Learn the Origins of Many Beloved Rides in ‘Behind the Attraction’

Learn the Origins of Many Beloved Rides in ‘Behind the Attraction’

What Happens When You Resign from a Non-Broker Protocol Firm?

How To Burnout-Proof Your Business

The 8 Best Laptop Stands for All Situations

Are You Incomplete Without Your Soulmate?