Red Sonja is a fictional sword and sorcerycomic-book superheroine created by writer Roy Thomas and artist Barry Windsor-Smith for Marvel Comics in 1973, partially based on Robert E. Howard‘s characters Red Sonya of Rogatino and Dark Agnes de Chastillon. Contemporarily, the character is based on the “RED SONJA” comic of the same name by Dynamite Entertainment (More on that later).

Who is Hannah John-Kamen?

Hannah John-Kamen has garnered international critical acclaim for her work across television, film and stage, working with some of the most prolific and respected names in the industry.

She was born in Anlaby, East Yorkshire, and is the daughter of a Nigerian forensic psychologist and a Norwegian fashion model. I’m personally thrilled that Hannah, a black woman will be featured in this rebooted franchise that starred Brigette Nielsen decades ago.

This is a terrific boost for black girls and  “mixed chicks” like my daughter to lead and be highlighted in Sword & Sandal and Fantasy film franchises I’ve always loved that historically they’ve been marginalized in.

Representation still maters, and good on Millennium Media for their role in moving the ball forward with Ms. John-Kamen’s inspired casting. 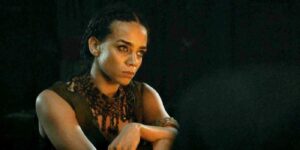 Hannah John-Kamen as Ornela in seasons six GOT episode “Oathbreaker”

She recently wrapped production on Resident Evil: Welcome to Racoon City and has starred in the Netflix Original series The Stranger, Steven Spielberg’s Ready Player One and Marvel’s Ant-Man and The Wasp. 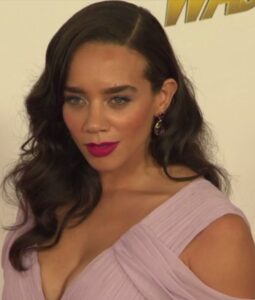 Hannah John-Kamen at Marvels “Ant Man and the Wasp” premiere

“Hannah is a very talented actress who we’ve been following for years and she IS Red Sonja. Her range, sensibilities and strength are all qualities we have been looking for and we couldn’t be more excited to embark on this journey together,” said Joey Soloway.

Jeffrey Greenstein, President of Millennium Media continued, “Hannah’s talent and take for Red Sonja, combined with Joey’s vision for the film is the perfect pairing to bring this reboot to life.”

Mark Canton (300, Power) and Courtney Solomon (After) are Producers.

Christa Campbell and Lati Grobman on behalf of Campbell Grobman Films and Andrea Sperling on behalf of Topple are also Producers. 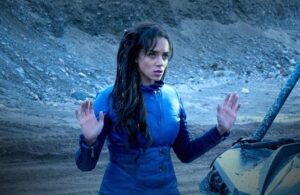 How can I catch up on Red Sonja’s Story?

From 2005, the series was published by Dynamite Entertainment. In issue #34, the original Sonja was killed and replaced by a “reincarnation”. The series was rebooted by writer Gail Simone in 2013, (who is reportedly a consultant on the latest film reboot) telling an altered version of Red Sonja’s early life story via flashbacks.

In 2017, Amy Chu began writing the series. Mark Russell became the writer in 2019 with a new storyline. In 2021, Luke Leiberman replaced Russell.

You can order back issues from Dynamite Entertainment here!

Red Sonja has appeared in numerous editions both solo and together with Conan, as well as in some Marvel comics crossovers. A novelization was published in the 1980s written by David C. Smith and Richard L. Tierney, and in 1985, a feature film starring Brigitte Nielsenin the title role, Red Sonja, was released. There have also been television and animated adaptions.

I’ll have more on this story as it be becomes available and hopefully I can score an interview with Hannah soon!

Stay tuned to this developing story!

John Mulaney Returns to Stand-Up With Set About Getting Sober

John Mulaney Returns to Stand-Up With Set About Getting Sober

“There’s so Much Need for Restoration”

Check out The Indispensable Expression Associated With The Bitcoin Pioneering Technology

#FASuccess: Michael Goodman on the Mix of Tax, Financial Planning