Can We Achieve Net Zero Carbon Emissions by 2050? A Mathematical Analysis

Is it possible to replace all fossil fuels with wind and solar by 2050?  The IPCC says that that’s what we have to do to avoid exceeding a 2 degree rise in global temperature.  Here is an analysis:

We begin with total global energy produced in 2019 by source.  (I am ignoring 2020 because COVID reduced energy consumption by 6.5%.)

Roughly two thirds of the energy produced by fossil fuels is wasted as heat. (I will make the simplifying assumption that nuclear and renewables are 100% efficient.) This gives us the following chart showing total delivered energy by source: 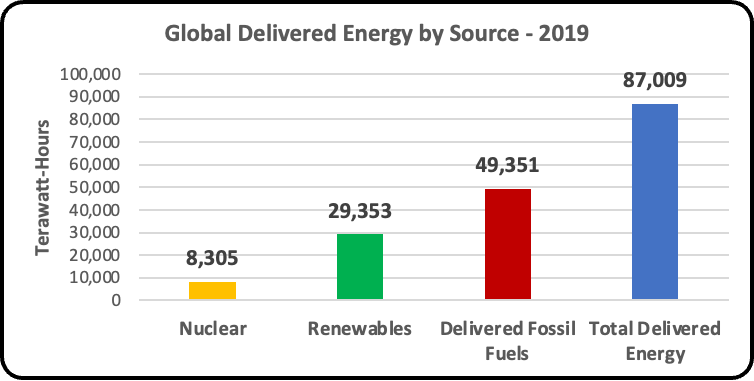 Now we’ll look at wind and solar as a percentage of total delivered energy for 2019:

Here is the EIA forecast for delivered energy in 2050: 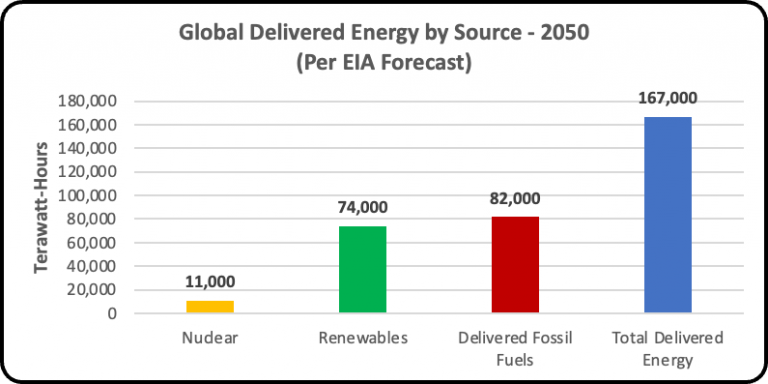 Renewables increase from 29,000 terawatt-hours to 74,000 terawatt hours – a 155% increase. Most of this is from wind and solar. Nuclear increases by one third, and total delivered energy increases by 73%.

I will now speculate that climatic deterioration between now and 2050 will reduce fertility and increase mortality. (Actually, this process has already begun.) I will assume that this will reduce the increase in demand from 73% to 40%. The next chart shows us the result of this adjustment. 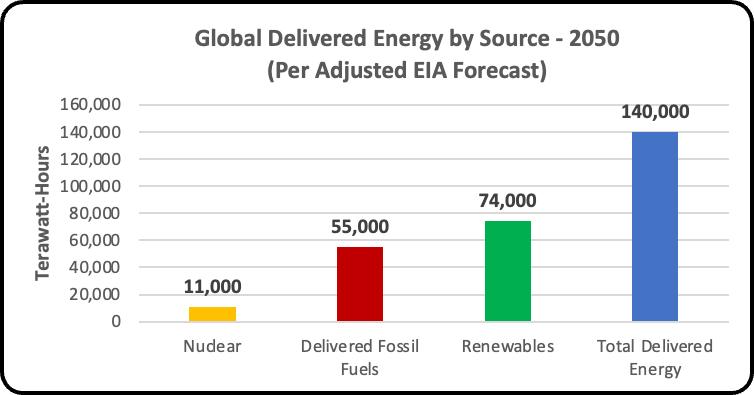 There is no change in nuclear and renewables, but the delivered energy from fossil fuels has dropped to 55,000 terawatt-hours and is less than the energy produced by renewables. But it still isn’t zero.

Current global CO2 emissions from human activity is around 36 billion metric tons. Assuming that this remains level for the next 29 years we will add another 684 billion tons of CO2 to the atmosphere. This will put us on a path towards a four to five degree rise in the global average surface temperature by the end of the century. The human race may not survive the consequences of an Earth that much hotter.

This post was previously published on emagazine.com and under a Creative Commons license CC BY-ND 4.0.

The post Can We Achieve Net Zero Carbon Emissions by 2050? A Mathematical Analysis appeared first on The Good Men Project.

And Then There Is Quora

How To Stop Stumbling Aimlessly and Pull Purposefully

How To Stop Stumbling Aimlessly and Pull Purposefully

How To Buy Your First Vintage Rolex

Is Your Company in Culture Shock? How Leaders Can Practice What They Preach

Boost Your Performance With SummaForte

4 Painful Mistakes Most Men Make Right After Getting Married