A Comprehensive Guide To Pocket Knife Styles and Blade Types

The first pocket knives were often referred to as “peasant knives.” Developed in the 17th century, these early folding knives had a simple hinge and no locking mechanism – just a small blade made out of iron or bronze that folded into a wood or bone handle. They were also called “penny knives” by some, which gives you an idea of how cheaply made they were, even for their time.

These days, we have a lot more options. Pocket knives come in countless combinations of size, blade shape, and style. While there’s no doubt a folding pocket knife is a great tool with countless uses, picking the right knife can be challenging.

Be sure to consider both function and form when comparing pocket knife styles. It’s important that your knife has the right blade size and shape for your intended use, but the style of the knife can be important for aesthetic reasons too. A good pocket knife can last a lifetime and become a family heirloom that gets passed down to your children and grandchildren. Choose one that reflects your personality.

There are really a dozen or more pocket knife styles, but to avoid getting lost in the weeds, let’s keep things simple. All pocket knives are folding knives, and they can be broken down into three basic categories.

Single blade folding knives are the simplest and most widely used type of pocket knife. And although single blade knives come in a wide variety of sizes, blade shapes, and styles, they all have one blade, typically with a locking mechanism to prevent accidental closures. These knives are typically sturdy, easy to use, and just the right size for everyday carry.

Multi-blade pocket knives, as their name suggests, have more than one blade. Two blades are typical, but some knives may have three or more. These knives have long been popular among outdoorsmen who may need different blades for different purposes (i.e. one for skinning, one for slicing, one for piercing).

Some common examples of multi-blade pocket knives include the Barlow knife, which has two blades that open side-by-side at the same end of the handle, and the canoe knife, which has a blade at either end, each opening in the opposite direction.

Also called camper knives, Swiss army knives have one or more blades, plus an assortment of other tools that may include screwdrivers, bottle openers, saws, files, and scissors. While these knives are handy, they tend to be less durable because they have so many moving parts. Multi-tools are similar to Swiss army knives, the key difference being that multi-tools unfold to become pliers. 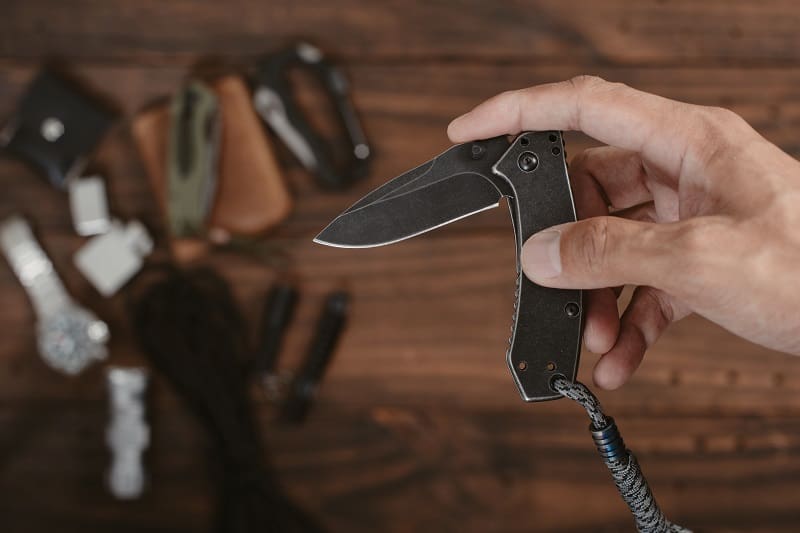 The size of a pocket knife is important for a variety of reasons. Knives should ideally be small and lightweight enough for comfortable everyday carry, but some knife users also prefer a somewhat larger knife for heavy-duty tasks. It’s also important to remember that, in various states, there are legal restrictions to where and when you can carry knives above a certain size.

Any knife with a blade under 2.75 inches is considered a “small” knife and ideal for everyday carry. Some pocket knives have blades as little as one inch, and others may have up to a 4-inch blade. Anything larger than that isn’t really a pocket knife. Some knives, like the My Deejo Creation, are available in various sizes and weights, allowing you to custom-design a knife to your own specifications. 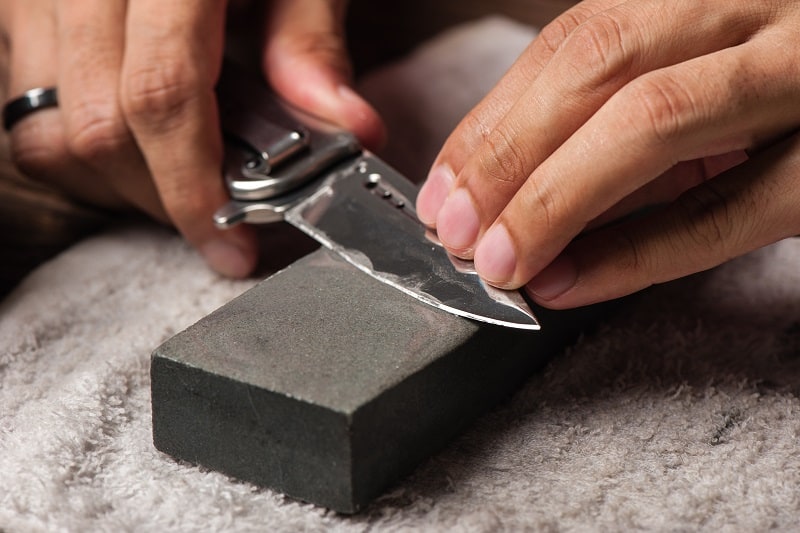 You have a few options when it comes to choosing the blade edge you want. Each has its pros and cons and excels in particular situations. At the end of the day, it comes down to what works best for your intended use.

Knives with a smooth, plain edge are the most popular and versatile. They’re ideal for push cutting, and the full plain edge makes these knives well suited to slicing with clean, controlled cuts. They’re also easy to sharpen, and the only situation in which they don’t excel is when you need to cut with a sawing motion.

A serrated edge makes sawing easier. It’s good for trimming branches and twigs, or for cutting through manmade materials like ropes and cords. The downside of a serrated edge blade is that it’s not good for clean cuts, and is next-to-impossible to sharpen. There are those who would argue that any job a serrated blade can do, a well-sharpened plain edge can do just as well.

Many knives offer the best of both worlds, with a blade that’s mostly plain, but includes a serrated section close to the handle. The Deejo Serration is one example of a knife that offers this feature, and it’s also common on a lot of hunting knives and bushcraft knives that are meant for outdoor use and survival situations. 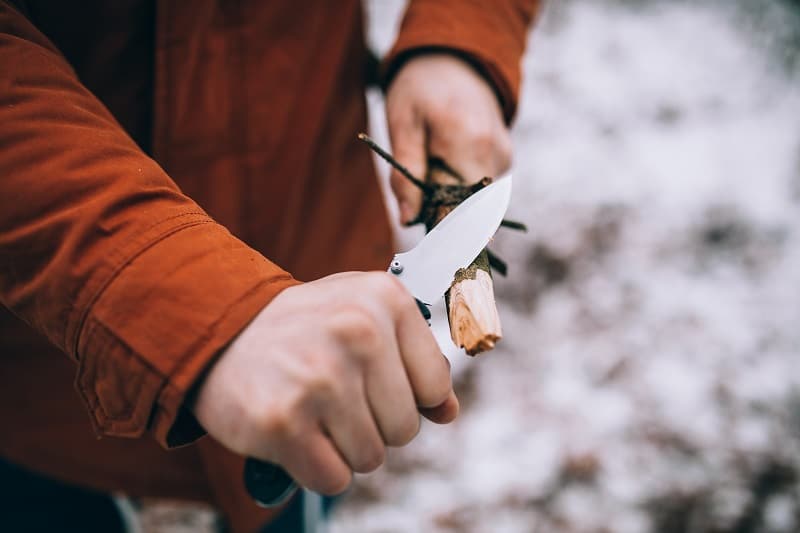 This is where things start to get wild! Knives come in an incredible variety of blade styles, each developed over time to serve a particular purpose. While many of these blade styles are versatile and well-suited to a wide range of uses, they also have specific situations in which they really shine.

Clip point blades have a distinctive shape, with a spine that looks as though the front section of it was literally ‘clipped’ off. This gives the tip of the blade an upturned appearance and a finer point that’s better for piercing. A lot of classic Buck knives like the 112 Ranger have clip point blades.

Pen blades are typically small blades, on which the spine and belly curve toward one another to meet at the tip. They were originally designed for cutting quills to make pens (hence the name) and many small pocket knives are colloquially referred to as “pen knives.” Pen blades are commonly featured on Swiss army knives like the Victorinox Swiss Army Classic.

The defining characteristics of a sheepsfoot blade are a straight cutting edge and a spine that curves down to meet it at a dull point. They are good at cutting without risk of accidentally piercing with the point, making them fairly safe to use. The Old Timer 735OT Mariner is a good example of a knife with a sheepsfoot blade.

Wharncliffe blades are very similar to sheepsfoot blades, the chief difference being that the spine curves more gradually to create a more distinctive tip, rather than dipping down close to the point. The Spyderco SwayBack is a high-end pocket knife with a Wharncliffe blade.

True to their name, straight back blades have a straight spine, with a rounded cutting edge that curves upward toward the point. Straight back knives like the CRKT CEO Folding Knife have a long spine with a significant “belly” to the cutting edge, making them tough and durable for cutting and slicing tasks.

The spine and cutting edge of a hawksbill blade both curve downward to create a sharp downturned point, much like the shape of a hawk’s bill. These are also referred to as talon blades, and while they have a menacing appearance, they’re best suited to utilitarian tasks like cutting rope and pruning vegetation. The Spyderco Tasman Salt 2 is a hawksbill knife that’s available with either a plain or serrated edge.

Spear point blades are symmetrical, with the spine and cutting edge each curving inward toward a point at the blade’s exact midpoint. Commonly used on daggers and throwing knives, spear point blades such as the Kershaw AM-4 Pocket Knife are adept at piercing and are sometimes used for combat and self-defense.

Designed for piercing and push cuts through tough materials instead of cutting and slicing, tanto blades have angled cutting edges rather than a curved belly. Tanto blades are more common on fixed blade knives, but a few folding knives, such as the Smith & Wesson &P SWMP11B, feature this blade style.

On a trailing point blade, the spine and cutting edge curve upward, sort of like the inverse of a hawksbill blade. The result is a blade shape with a rounded belly and a very fine point. While it might appear good for piercing, this tip is actually quite fragile, making trailing point blades better for fine cutting and slicing. Knives with trailing point blades like the Kubey KU150 Folding Pocket Knife are excellent hunting and fishing knives.

How To Make Smart Data-Driven Decisions

How To Survive Depression – by Someone Who’s Been There