Student loan debt in the United States stands at about $1.8 Trillion, or about $5,538 per person. Analysis of the most recent data (2017) compiled by the National Association of State Budget Officers shows 18 states of the country, the citizens of those states owe more in student loan debt than the entire budgets of those states, which includes both federal and state spending.

Interestingly, it was found that the overwhelming majority of those states (15 of 18) voted for Donald Trump in 2016. Even using the controversial results from the most recent election, we are still left with the large majority of these states (13 of 18, or 72%) being “red states”. This should be of significant concern to the governors, senators, and state legislatures of the affected states. 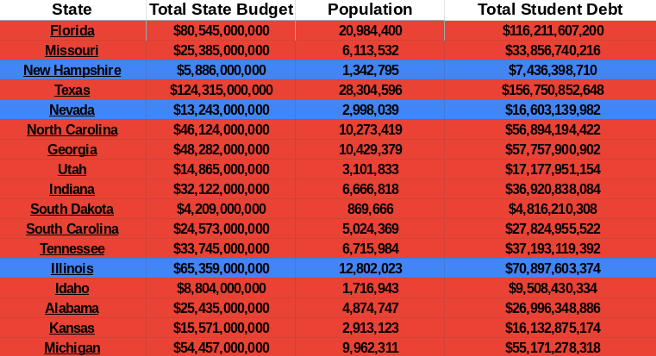 The federal student loan system has catastrophically failed by all reasonable metrics, and has become something that no conservative should support. In the absence of constitutionally enshrined bankruptcy protections, statutes of limitations, and other fundamental consumer protections (removed by Congress), the lending system has turned predatory. The Department has been booking upwards of $50 Billion per year in profits annually from the lending system (some of which is used to pay for Obamacare), and White House Budget data going back decades show that the government has managed to make a profit, even, on defaulted loans- a claim that no other lender can make, and a defining characteristic of a predatory lending system.

There are 44 million voters in the country carrying about $1.6 Trillion in federal student loan debt. According to Trump appointee Wayne Johnson, who ran the federal lending system until recently, this was closer to 80% just before COVID-19 hit. Also, we now know that the class of 2004 are defaulting on their loans 40% of the time, but they were only borrowing a third of what is being borrowed today. It is no stretch to say that we are now looking at a default rate of 75% or higher for more recent borrowers. That is about four times higher than the default rate of sub-prime home mortgage loans.

Over $100 billion in interest alone is siphoned from these citizens, and sent largely to the books of the Department of Education, which owns 85% of all student loans.

A majority of these 44 million borrowers identify as being politically independent or republican. More than 40% never graduated. Many attended community colleges, and even vocational schools to learn a trade. All of them are losing sleep over their student loans, and they span the political spectrum. Despite popular misconceptions, there are more people over 50 years old with student loans than there are people under the age of 25, and they owe triple what the younger generation owes.

These citizens are hindered from buying homes, starting businesses, families, and this is badly sapping the vitality of the states- both economically and socially. This is the largest emerging voting block in American politics today.

Some conservatives, like Wayne Johnson, are now calling for both immediate reinstatement of bankruptcy protections to the loans, and widespread loan cancellation.

We have heard little or nothing, however, from the governors, senators, and state legislatures of these states. In fact, most conservative media has to this point been strongly against the notion of loan cancellation, and resistant to proposals for the return of bankruptcy protections. By their silence—or even opposition—they are betraying both their constituents and their principles.

True conservatives have been tricked—largely by swampy, “conservative” media—into taking the other side of this issue along hastily manufactured partisan lines.

This has got to change. Governors, in particular, have a strong responsibility to protect their citizens against predatory lending, to strengthen their economies. By being silent about this statewide- and nationally- threatening lending system, they are shirking those responsibilities.
The President has the executive authority to cancel all federally owned student loans (85% of all student debt) by executive order. This could be done without needing congressional approval, or appropriation. This could be done immediately at zero additional expense to the taxpayers, and without adding anything to the national debt.

We strongly urge governors, senators, and state legislatures everywhere- but particularly in these affected states, to call on the President to exercise this authority, free their citizens from this unconstitutional debt, and end the lending system in favor of a more fair, rational, and state-friendly funding mechanism for higher education in this country.

If you agree with this, please sign our petition.

Improve your writing, expand your reach, and monetize your craft.

We welcome all experience levels.

Learn more on our Patreon page.

How Each Zodiac Sign Acts When They’re Nervous Around You

Seniors Are Not the Problem – They Are Part of the Solution

Balancing Business and Bath Time: A Guide to Fatherhood and Entrepreneurship

I’m Overwhelmed… Am I The Only One Feeling This Way? | Dad University

How Each Zodiac Sign Acts When They’re Nervous Around You

If You Want To Grow, You Need To Actively Work On Yourself

5 Books by Black Authors To Read for Black History Month

Hope, Resilience, and Inspiration: A Call for Submissions

The World’s First Space Hotel To Open by 2027